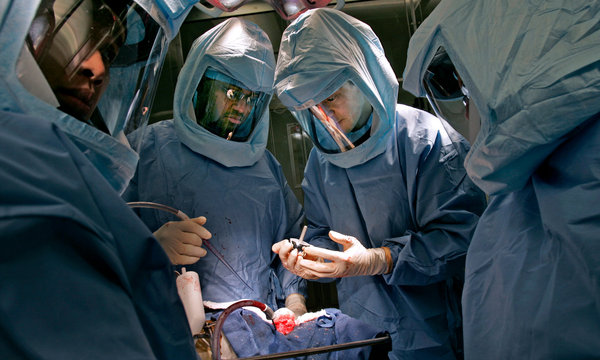 Hip resurfacing, an alternative to traditional hip replacement, at the Hospital for Special Surgery.

The group, the California Technology Assessment Forum, reversed a position it took just last year, citing recent findings by orthopedic registries overseas that some resurfacing devices are failing prematurely and health concerns about metallic debris released as the devices wear.

The findings of the forum, which is financed by the Blue Shield of California Foundation, are not binding. Still, the group's report is likely to be disputed by advocates of resurfacing and patients who say they have benefited from the procedure.

Hip resurfacing differs from a traditional joint replacement in that more of a patient's thigh bone is preserved than in a standard operation. Doing so, device makers and orthopedic experts say, allows patients to remain active and preserves bone for future procedures.

The components used in a hip resurfacing device, like those used in so-called standard metal-on-metal hip implants, are made of metals like cobalt and chromium. As a result, metallic debris-related problems associated with all-metal standard hips have also turned up in some resurfacing patients.

In recent years, the use of resurfacing in women and older men has dropped amid reports that the procedure had failed prematurely among those particular groups of patients. Orthopedic experts say they still believe that resurfacing remains a valuable technique for younger and middle-age men.

In performing a review, the California Technology Assessment Forum examines existing studies and data to determine if a device or a procedure meets certain standards, like improving patient health outcomes. The review involving hip resurfacing looked at how that technique compared to benefits of a traditional hip replacement.

Such studies have yet to be performed, Dr. Walsh wrote, an issue that has taken on new import because of recent information from databases in England and Australia showing higher-than-normal failure rates for some resurfacing devices. Little data also exists about the long-term health consequences of the metallic ions released by the devices, she noted.

"It is incumbent upon the hip resurfacing community to prove the efficacy and safety" of the procedure though clinical trials rather than "subjecting young patients" to potential long-term harm, Dr. Walsh concluded.

Dr. Edwin P. Su, an orthopedic surgeon at the Hospital for Special Surgery in New York who specializes in resurfacing, said the report failed to take into account a number of benefits for certain patients, including reduced potential for dislocating joints and increased mobility.

"I think there are significant benefits to hip resurfacing that make it worthwhile for a select group of patients," said Dr. Su, defining that group as active men who are younger than 65.

A spokesman for Blue Shield of California, Steve Shivinsky, said it would continue to cover resurfacing where medically necessary, reflecting the recommendation of a different panel.

The mostrecent report of the Australian orthopedic registry found that the so-called Birmingham hip, which is sold by Smith & Nephew, had the best results for a resurfacing device.

The registry also reported that overall use of resurfacing there was declining, and also decreasing in men over the age of 55 years.

Other groups are also planning in coming months to take a closer look at resurfacing. In its most recent report, the National Joint Registry of England and Wales noted that further studies were needed to determine whether hip resurfacing conferred true advantages over the standard.

The American Academy of Orthopedic Surgeons is also reviewing the issue.