In 2009, a judge in Manhattan had a lucrative appointment to hand out: oversight of a diamond district building that was drifting into foreclosure.

Nearly 600 people in Manhattan had been approved for such work. But the job went to a lawyer named Mark D. Lebow, who is the husband of Patricia E. Harris, Mayor Michael R. Bloomberg's most trusted aide.

The foreclosure crisis has caused a surge in the number of court-appointed receivers for distressed properties in New York, and politically connected lawyers are benefiting.

Yet even as the fees mount, totaling millions of dollars, it remains unclear why judges are selecting some of these lawyers, and whether the fees are being well spent.

The court system in New York State has long been criticized for fostering a system of patronage appointments that enriches lawyers and others with ties to influential politicians. Court officials defend the process of selecting receivers for distressed properties, saying judges are looking for people who they know have done good work.

Over all, the number of receivers appointed by judges to oversee distressed properties in the city jumped to 284 last year from 47 in 2007, records show.

Paul Vallone, a scion of one of Queens's most powerful political families, earned nearly $17,000 for one assignment. Howard R. Vargas, a former commissioner of the Taxi and Limousine Commission, was awarded $28,000 for three cases. Marc Landis, a Democratic district leader and member of the transition team of the new state attorney general, Eric T. Schneiderman, was compensated $22,000 for supervising three buildings.

And those were for assignments that were given out earlier in the foreclosure crisis and that have already yielded fees. The newest appointments, with the billing to come, are filled with even more lawyers with ties to the powerful.

Dominick Calderoni, a law partner of State Senator Jeffrey D. Klein, a Bronx Democrat, was handed six receiverships. William C. Thompson Sr., the father of William C. Thompson Jr., the former city comptroller and mayoral candidate, got six. Gregory C. Soumas, a member of the city's Board of Elections, received two, though he said one property went into bankruptcy, ending his involvement.

When a building goes into foreclosure, a judge appoints a lawyer as a receiver who acts a property's temporary landlord during the process. Receivers are entitled to fees that typically amount to 5 percent of a property's revenues. Judges can award less than 5 percent, but usually do not.

The court-appointed lawyers in turn usually hire property managers and other lawyers to assist in overseeing the properties. The receivers do not pay out of their own pockets for the costs of the property managers and other lawyers. That money comes from the properties' revenues. "This is why mortgagees hate foreclosures," said Harold Shultz, a senior fellow at the Citizens Housing and Planning Council, a nonprofit research group. "During this process all these people are sucking money out of the building."

With complaints about the quality of receivers growing, city officials said they were considering state legislation to require people seeking to become receivers to be vetted by the city's Department of Housing Preservation and Development. Receivers are now vetted only by the courts.

Not all receiverships come with high fees, or go to lawyers with ties to politicians.

Some lawyers are handed cash-poor and dilapidated buildings, and are hamstrung by a lack of resources. Some appointments can be low paying and time consuming.

Other lawyers, though, have won plum appointments. The receivership obtained by Mr. Lebow, the husband of Ms. Harris, the first deputy mayor, was one of the highest-paying in the city recently. In court papers, the judge did not explain why she gave Mr. Lebow the work.

There are now 605 people eligible to be receivers in Manhattan, according to court records.

Mr. Lebow is a partner in his own law firm, Lebow & Sokolow, and has served on the board of the Metropolitan Transportation Authority since 2002. Mr. Bloomberg recommended him for the authority position. Mr. Lebow did not respond to six telephone and e-mail messages left over a month seeking comment on the receiver appointment.

Stu Loeser, a mayoral spokesman, would not comment. The judge in the case, Marylin G. Diamond of State Supreme Court in Manhattan, has recently retired, and did not respond to requests for comment. State Supreme Court judges, who appoint most receivers in these cases, are elected.

Justice Diamond appointed Mr. Lebow as receiver for the 11-story building in the diamond district, at 576 Fifth Avenue and West 47th Street, in 2009. Mr. Lebow noted in court papers that his experience included work as a receiver, broker and member of the Real Estate Board of New York. 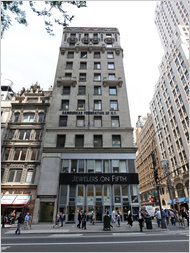 Foreclosed buildings in receivership, like the one at 576 Fifth Avenue at 47th Street, have been moneymakers for receivers.

Mr. Lebow is not overseeing the building himself. A management company and another lawyer were hired to handle the building's day-to-day affairs. Yet Mr. Lebow estimated in court papers that he devoted about 30 percent of his time to the building. His compensation, he wrote, roughly equaled his regular billing rate of $650 an hour.

One full-time building employee said he had never seen Mr. Lebow there.

Still, tenants in the building, which houses diamond wholesalers and jewelry booths, said conditions had improved since Mr. Lebow hired a new property manager. The bathrooms and lobby are cleaner, one tenant said, though another said appeals to fix a leak had been ignored.

Court officials noted that the state adopted reforms in 2002 intended to reduce patronage.

Asked about the appointment of politically connected lawyers, Ann T. Pfau, the state's chief administrative judge, said: "To some degree, it's human nature. When you have a property that's vulnerable, you want to appoint somebody that you have faith in, or someone maybe you were familiar with."

Mr. Vallone, whose father was speaker of the City Council and whose brother serves on the Council, said that he had been appointed as a receiver just four times in two decades, and that the receivership that paid him $16,600 lasted from 2008 to 2010.

"It looks like a lot," Mr. Vallone said, "but if you spread it out over three years, it's not."

Mr. Landis, the Democratic district leader, said that as a receiver he fought to force lenders to pay for repairs. "The compensation was a fraction of the effort involved," he said.

Perhaps the most profitable recent receivership went in 2009 to a retired judge, Seymour Boyers, 84. He was paid $760,000, or roughly $7,800 a week, to oversee the case of the sprawling Riverton apartments in Harlem. Mr. Boyers has specialized in medical malpractice and product liability while in private practice. Members of his law firm donated $1,000 to the campaign of the judge, Richard F. Braun, who appointed him as a receiver.

Mr. Boyers said he was not aware of the request for repairs, which he said were sent to the property manager, until months after they were issued.

"Any call I received, I always acted on, and I never heard any criticism," he said. "I worked many, many hundreds of hours, that's for sure."